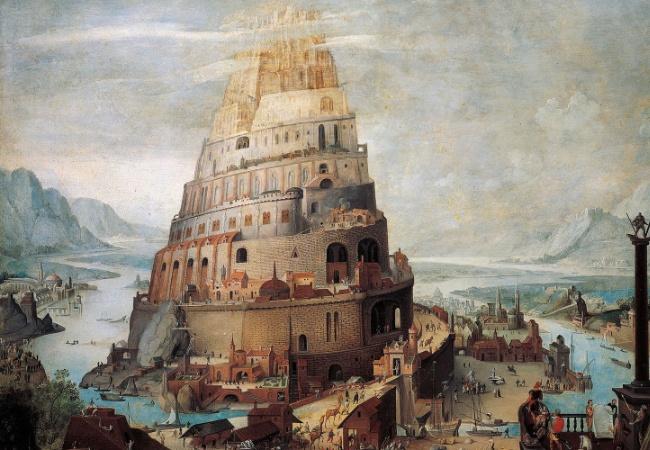 How do you think humanity will transition from spoken communication to tele(m)patic communication ?
Will we all suddenly be tele(m)patic or will that take a few more generations ?
How did that actually happen with other civilizations ?

Recently I have been playing with these questions regularly and then it was time for a newsletter !
I ask Ezra'el for inspiration for a topic and out comes, again nice and short, "Tower of Babel.

The fascinating thing is that Babylonia was brought up by Ezra'el a few months earlier during one of the ET-Healing Experiences in response to a question from a participant about a connection between Ukraine and Israel.

Although my Bible knowledge is limited, I of course remembered "the Babylonian confusion of tongues," but really knew little else about it.
After this prompting from Ezra'el for the newsletter, I plunged into history, grabbed the Bible and started looking for Babel !
This turned out to be a special journey with challenging facets ... quite a revelation.
I would like to take you with me !

There are currently over 7,000 languages worldwide and most people speak only one language, some people are bilingual and few speak more than two languages.
For this reason alone, it is no wonder that extraterrestrial guides want to communicate with us in a universally tele(m)patic way.

But imagine a world in which we speak only one language ...
Because once, apparently, we did.
After the Flood, all humans still spoke one language (Genesis 11:1).
Until the time when the Tower of Babel was built ...

Just for time perspective (according to Archbishop Ussher)

This event in Babylon was so important in the history (c.q. evolution) of mankind that it is named in several books in the Bible, beginning in the first book of the Old Testament Genesis and concluding in the last book of the New Testament the Revelation of John.
Thereby, this is not only recognized as an event in the Western tradition, it is also a well-known phenomenon in lore of ancient civilizations just like the Flood.

That word sounds ominous but an apocalypse (Oudgrieks apokálypsis) is a revelation of knowledge or an epiphany and because this book describes the ultimate victory of good over evil and the end of the world as we know it, the term apocalypse is used in everyday language to describe a situation in which the world as we know it seems to be going under.
However, the book of Revelation actually describes the transition to a new world. In the Old Testament, Babylon was the cradle of the Babylonian Empire that ruled over much of the world and imposed a worldview on all the nations she conquered.
She was cruel, she was arrogant and thought she would rule forever.

In the New Testament, Babylon is more of an archetypal empire described with symbolism.

THE TOWER OF BABEL

The city is represented in Genesis as "Babel," the city where people wanted to make a name for themselves in defiance of the word of God.

The idea with the building of the Tower of Babel in Genesis 11 was that people were essentially worshipping their own human achievements and also wanted to be praised for their power and accomplishments - even wanted to be worshipped.

The Tower of Babel is traditionally depicted as a tall, round building, of which, incidentally, the Bible itself does not give specific dimensions. The Hebrew word for tower is migdal.
Interestingly, this word means "tower," but also figuratively represents a flower bed that yields a pyramidal shape which means the Tower of Babel may have been pyramidal or ziggurat shaped.

The ziggurat is found in different parts of the world and 25 have been found in the region of Babylonia alone, the best preserved of which stands in Ur, near what was then Babylon.

So the motivation for building the tower of Babel, according to the scriptures, was to "build name for self," not to bring reverence and thanks to the Creation/Creator nor for the good of all people.

Babylon is also the empire that occupied Judeah for a long time, destroyed Jerusalem, burned the temple and carried away the people of Israel in exile.
Eventually justice comes and the empire is literally razed to the ground, in response to her wickedness, arrogance, pleasure-seeking and cruelty to the people.

And then it says something striking in Genesis !

The Lord said, "If as one people speaking the same language they have begun to do this, then nothing they plan to do will be impossible for them.
Come, let US go down and confuse their language so they will not understand each other."

While it remains to be seen who wrote the original scripture Genesis, whether it is complete and whether it was then correctly translated into our modern language, all the versions I have seen say 'let US go down and confuse ...' .

Again the plural person form is used just like earlier in the book of Genesis 6 where it talks about 'the sons of God' !
Could the one(s) who intervened in Babel now be the same 'us' as those described the deleted biblical books of Enoch?

If we then dig a little deeper into who then are the gods the Babelonians worshiped, we come across Marduk, the son of Enki, whom we know from the time of the Anu and Nephilim.
Marduk deviously allows himself to be proclaimed as the Ruler of the Heavens, the Creator, the Bestower, the Hero, thus taking the place of Anu.
And Anu has intervened before according to the books of Enoch, not so much to punish mankind, but to bring his rival (grand)sons into compliance.

Besides, is it fair and just to punish HIS creation, humanity, especially women, because "sons of God came in to the daughters of men, and they bore children to them. From the biblical books of Enoch, it becomes clear who these 'sons of God' were and what punishment awaited them.

And now Babel, why would God have chosen a divide and conquer strategy ?
Sounds opposite to how most people perceive the Creator / Creation.
So is this the full story ?

Because what it says here in Genesis is also that once we as humanity start speaking "the same language," anything is possible that we can imagine.
And that the use of this mechanism for evil purposes against humanity ultimately has very evil consequences for the abusers themselves.
'What you put out is what you get back' ... the 4th Universal Law

As prophesied by the prophet Daniel, soon after the confusion of tongues, this cruel Babylonian empire went down completely due to the lack of communication between them and the increasing divisions between them and became an easy prey for the neighboring Persian Empire that razed Babelonia to the ground with equal coin.

The concluding book in the Bible once again speaks of the falling of the Tower of Babel, but now seemingly more metaphorically, although parts of it have easily recognizable parallels in today's reality.

The scripture is not called "Revelations" without good reason, referring to making public, visible, revealing (revelation, to reveal), coming into the Light.
Sounds almost like a disclosure or the lifting of the veil.

It doesn't say it specifically, but it feels like a world where humanity can understand each other again regardless of the words spoken.

Only in Zephaniah 3:9 something is mentioned in this direction ...
"For at that time I will change the speech of the peoples to a pure speech, that all of them may call upon the name of the Lord and serve him with one accord."

I have not been able to find anything concrete about this anywhere else, but it would not surprise me if we as humanity first take an intermediate step towards tele(m)pathie in the form of an "ancient" sound language that everyone understands and especially can feel, as we know this for example from Sanskrit or Hebrew.
Sound languages have harmony by nature.
The original word harmony also comes from music and is basically about the "doctrine of chords," or the tones that harmonize well.
Language then already comes closer to frequencies and feeling the transmitted information.
But this is just my idea.

What do you think?

Wow folks, who would have thought it ?
An adventure, much inspiration, much learning and no answers to my initial questions about the transition from the spoken word to tele(m)patic communication.
There are actually more questions than answers now .... super !!!

In any case it is clear how important it is for a civilization to be able to keep communicating, to speak the same language and - more importantly - to be able to understand each other.
Especially in these times it is good to think about.

The above story is far from finished and at the same time it has many points of contact with today's world.
For now we will leave it at that... to be continued !

We wish you beautiful moments of peace in the midst of the hectic world outside.
Enjoy October's full moon, the Hunters Moon.
You can feel the magical energy in the air this month, the veil is thinning and this increases our ability to communicate with other worlds. It is an opportunity for spiritual growth, purifying our intentions, gratitude and finding ways to unwind and enjoy ourselves.

Hug each other and be there for each other.
For now, lots of love !!!

And see you soon, in person, at one of the online events and on the online community Human-ET One!