Am I an extraterrestrial ? 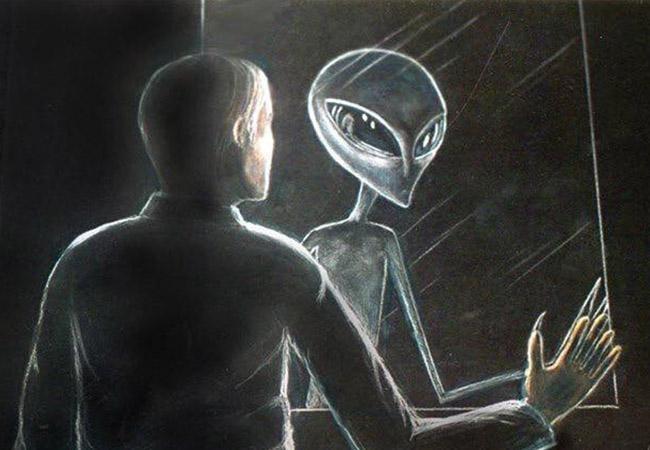 He comes into our practice for the first time concerning his physical complaints. He wants to know what it is, he wants a diagnosis.
And he' s very honest about the extraterrestrials: 'I'm pretty skeptical. I am a scientist.

So the session starts with a very animated conversation that then very naturally flows into the ET-healing session and which will end surprisingly.
My team takes a lot of time aligning their energy with his.
To ensure that during the session everything can flow effortlessly and be experienced as smoothly as possible. They are impressed by his 'Light Energy'.

The team proceeds with the investigation of the various physical complaints. He receives extensive confirmation of his complaints and in details they show what they perceive on the physical level.
The natural circulation of organs is out of balance. The bladder is flooded with emotions. The system itself cannot dissipate the overload of energy that should be dissipated.
This results in an increase in the number of complaints.
Later in the session he will be supported in this respect for the coming period as well.

As they further clarify his physical complaints, they also refer to the theme safety or rather unsafety.
This theme has its origins in other lifetimes and is also being experienced in this life at various moments, contexts and at different levels. He is familiar with the way in which blockades and traumas from other lives may have their effect in the present life, including the physical health of the person.

Then it becomes silent for a moment in the ET-healing session ...

... and my extraterrestrial guide asks him to feel deeply as they share the following words: You are a Master.
He reacts instantly and with great tension throughout his body. This tension also persists.
My extraterrestrial team and guides stay silent for a moment to give him the opportunity to connect to his system even closer, to experience it fully and to start sharing it.
He is familiar with this tension, this field of tension. He has been having this all his life. Then he returns to silence again.

He is being given the time to feel his spoken words and their impact (as well as the impact throughout his entire life) once again. To be felt. To be experienced and to be seen what's going on.
Then the ET's show me a magnificent temple, he is standing in that temple, next to two huge doors which are closed. Wooden doors with beautiful gold ornaments.
He is trying to open the doors, to make an opening to the world. He was unable to do so. This is about opening the door to his own Holy Temple.
He was given a lot of explanation about the relationship between the tension and his own Holy Temple.

He is in the NOW in at the beginning of a new phase in his life. He is free to make new choices. Every day. To have the courage to choose for oneself.
He is being playfully challenged to play even more, including with this new energy. He is ready for it. Ready for the next step, for working with the energy as well in his own form, his own way.
Now he is being asked to open the doors of (t)his Temple again.

He gains even more insights about his own energy and what he has been able to do with it, and what he will do with it in the future, if he so desires. And also in nature.
Regarding the tension he has been carrying with him all his life, he said at the end of the session ... I will put it more deeply into words, "I don't feel at home here on Earth.

Then the Orion Masters of Light come in, emphasizing their respect for him.
They are very grateful for being allowed to be so close to him in this session. Once again. For they recognize him, his energy patterns.
They know him. Very well.
They bowed and thanked for his braveness.

Then he asks his last question: 'I don't think I am from this Earth ... Am I an extraterrestrial ....?

Silence, acknowledgement and confirmation from the team at all levels.