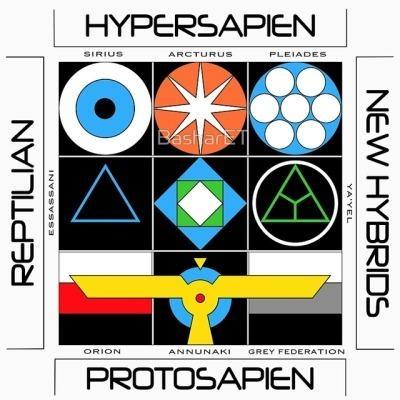 In the exciting three-part weekend event on 2014-09-26, Bashar described the most relevant extraterrestrial civilizations that have (had) influence on humanity and the evolution of Earth in great detail.

According to Bashar, 17 extraterrestrial civilizations have been in contact with humanity in the last hundred years (1909-2009).
In regards to audiences, however, according to Bashar, at any point there might be "457 billion" consciousnesses (including 250 million Essassani) listening in to our interactions with Bashar.

Do understand that your government is very well aware of our existence -- very well aware.
But because you have created your society in layers that can hide information from other layers, many of your members do not have that data -- although many of the mainstream members within your governments do.
Quite a number of civilizations have already interacted with your world -- among them individuals from our world, Essassani, and from Arcturus and Sirius.
And there are the Pleiadians and the Zeta Reticuli.
There have been actual physical interactions between members of our society and your government.

Before we physically land on your planet, we would suggest you take a good look around your world.
We then would ask you this: Would you want to land in the middle of a war zone?
We therefore make whatever contacts can be made individually when the opportunities arise, and we do so quietly -- allowing the information to filter in, and soothing the raging fires of your world.
Then by the time the fires are banked, we may land on Earth and openly communicate with you.
As we have often indicated to you, this time is approaching; within the next two to three decades this can be a relatively common thing.
But right now, by many of your own admissions, in the general cross-section of your society you do not want such widespread interaction.

Your society is not structured to handle it.
It would cause -- in our estimation of your energy in general -- a destructurization of a negative sort, where there would still be fear and panic, where there would still be self-doubt and the belief that your reality is not in your hands.
We do not want you believing we might be something greater than you, for far too many of you would be too willing to give over your power to us.
We do not want it, thank you. We have enough of our own -- all that we need to live the lives we have chosen to live.

Our methodology is to use what you would call the tried and true method.
It is the reflection to you of your own power so that each of you, individually and collectively, can make the decision as to whether or not you want to interact with us as a society. That is completely up to you. Should you decide no, we will be on our way.
It is our perception, however, that you are deciding yes, and so we "hang around."

As we have suggested before, the idea is that we choose to remain obscure so that we are not looked upon as your saviors.
We are not here to save you; you do not need saving!
We are not here to run things, to live your lives for you.
We have our own lives, and are very busy, thank-you-very-much!
We have no time to take responsibility for living your lives as well.
But we do love you; we do desire that your world and our worlds shall one day soon explore together all that exists in the Infinite Creation, as we already do with many other civilizations. And when you determine that we, as a group, can interact as equals, we will then do just that.

It is our perception that within the next 30 to 50 of your years the changes that are taking place upon your planet will make it conducive for your world to be fully involved with our civilizations. That is indeed all the time it will take.
Rather than the segregation and separation you have been exploring for thousands of years, once you begin to explore integration, it doesn't take that much time.

The protosapiens, says Bashar, are the precursors of/for all human forms in our galaxy and basically contain the humanoid form with a torso, a head, two legs, two arms, the idea of fingers and toes in a variety of numbers, two eyes, ears, nose, mouth... simply the general building form of a humanoid and then in many, many versions depending on and adapted to the habitat in which it has projected itself.
Proto-sapiens visited the Earth during dinosaur times, blending saurian genetic material with their own "to create what you now call the Reptilian species that you encounter from time to time."

On the hypersapien side of the enneagram is shown the modern Anunnaki and the Andromedan energy.
Bashar doesn't make it clear whether Andromeda refers to our intragalactic interstellar neighbors of the Andromeda constellation, or to the intergalactic neighbors we may have in the Andromeda Galaxy, which is of the same constellation but far more distant (in the order of 10,000 times) than the star systems in the constellation.
The latter would be intergalactic neighbors not only to Humanity but to all other consciousnesses in the Interstellar Enneagram.
Billions of years from now, our Milky Way galaxy will merge with Andromeda, so our galactic consciousnesses are in that sense destined to become one.

According to Bashar, there is an average of one civilization per 5-7 light-years of space, but this metric is denser in pockets of star systems created from the same nebulae, such as in our Local Bubble. Our nearest neighbors, within a 12 light-years radius, to whom we could to some degree relate to and interact with, says Bashar, are in these star systems:

According to many channels of extraterrestrial beings, a hands-off policy is applied to the benevolent consciousnesses, with one exception... they will not allow us to destroy planet Earth through nuclear war.
They will not prevent us from destroying our planet though, that's our choice!
It is many times clearly indicated that we will not be allowed to destroy our planet with nuclear weapons, because, as explained, the effect of this goes far into the Universe and will lead to changes in the time-space continuum that will harm other civilizations.
We may choose the destruction of our own world, but not that of another civilization.
The Galactic Federation will not allow this and has made this known by intercepting nuclear missiles and disabling installations with nuclear missiles, among other things.